Everything You Need to Know AboutThe Great Flood

Noah's ark and the great flood is possibly the second most popular story in the Bible, but there are some important details you'll never hear mentioned in Sunday school.

135 million people were unaffected by the supposed flood.

35 million people lived on Earth when the Bible says the story took place, yet none of them were affected by a supposed flood. Had there been a worldwide flood that reduced the world’s human population to a mere handful, civilizations and their cultural artifacts would have been destroyed.

Alas, the archaeological record shows that various civilizations around the world, and the human race, carried on in a steady fashion before, during, and after the flood supposedly took place with no evidence of such a disaster. Zoogeography shows the same for the animal kingdom. Nowhere in the history of modern man has life ever been bottle-nosed down to just 8 people, nor other animals to just 2 of a kind. 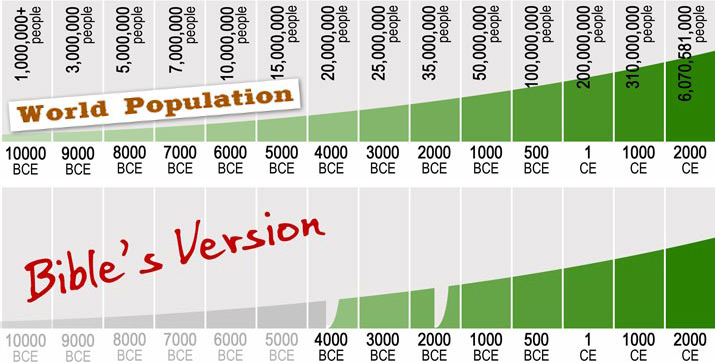 Above is the historically accurate world population of humans from 10000 BCE to 2000 CE followed what it would look like if you insert claims from the Bible. The stories say only 2 people existed in 4000 BCE (Adam & Eve) and later around 2000 BCE the Bible claims the human population dropped down to just 8 people, Noah and his family.

2If a global flood did happen, nature would have been altered.

If such a flood happened then the species of freshwater fish that can’t live in water polluted with dirt and/or salt would not be alive post flood. Many plants around today, including their seeds, also would no longer exist if they were submerged under water or if their needed established soils were stripped away.

3The Bible's version is based off of previous stories. 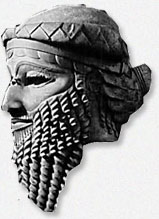 The most popular Mesopotamian flood story is the Babylonian Epic of Gilgamesh. It pre-dates the story of Noah and is likely the most influential source for the book of Genesis.

Gilgamesh was a demi-god who sought out Utnapishtim, the survivor of the Great Flood. Utnapishtim told how the gods, angry at humankind’s unruly behavior, deiced to wipe out the mortals in a flood. He himself was warned by Ea, the god of water, and told to build a boat. Upon the boat were Utnapishtim and his family, along with “the seeds of all living creatures.”

There is also the Epic of Atrahasis, one of the oldest known great flood stories dated to the reign of Ammi-Saduqa (c. 1646-1626 BC). In this story, the god Enlil, angry at humankind’s unruly behavior, plans to wipe out mankind with a flood. Atrahasis is warned by the god Enki and dismantles his house, which is made of reeds, to build a boat. Upon completion Atrahasis boards the boat with his family and animals then seals the door. The storm and flood begin, then after seven days comes to an end when Atrahasis offers sacrifices.

4The great flood stories are loosely derived from actual events. 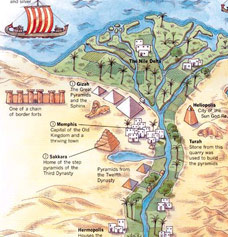 Exaggerated flood stories are so popular in the Mesopotamian because of several localized floods that actually did happen. Such as the rise of sea level after the ice age or the flooding of the Nile. Every year the Nile would flood causing destruction. The water would strip away the land, but when the water receded a layer of black mud was left making it the only soil in Egypt fertile enough to plant crops, thus allowing life to begin again. Ancients referred to it as the “Gift of the Nile.”

5The Biblical story is one of mass murder.

The Bible claims that God killed every human at the time, other than Noah and his family, which is roughly 1. 35 million people! This includes all children, babies, and the unborn. By comparison, the holocaust would be extremely insignificant.

This act of God should be a sickening story to anyone with a shed on morality.

6Just like a global flood, the ark also never existed.

Obviously, since there was no global flood there was also no need for an ark. Which is good, because a 450 feet long ark made entirely of wood like the Bible claims would not stay afloat. It would break apart right away from all the stress, even in calm water and without all the animals on it. Wood is simply not strong enough to prevent separation between the joints. The longest wooden ships are only about 300 feet long, 150 less than Noah’s, and even in ancient times, they required reinforcing with iron straps. Even then they still leaked so badly they constantly required pumping.

Apologists however still claim they found Noah’s ark. The Christian group “Bible Archeology Search and Exploration Institute” (BASE) claims that a 400-foot long silicified sandstone rock formation at Mt. Suleiman is the ark since it looks like wood from a distance. Other’s have claimed that some ancient wood found must be from the ark simply because it was found on Mt. Ararat. And Yeung Wing-Cheung, a Chinese Christian filmmaker, released a film of his ark findings on Mt. Ararat but refuses let anyone see the evidence and keeps the location a secret.

Regardless of their wishful thinking, even if a giant ark was made and found it doesn’t mean Noah’s ark existed, could have ever floated, nor that the flood could have possibly happened.

The global flood as described in the Bible, the Epic of Gilgamesh, and the Epic of Atrahasis obviously never happened. Like most far-fetched tales, they are nothing more than greatly exaggerated stories of localized natural events.