Everything You Need to Know AboutThe Bible’s knowledge of nature

When the Bible was written it didn't reveal anything about nature that man didn't already know, but it sure does reinforce some crazy views that man once believed in.

1Supposedly the sky holds up a giant body of water. 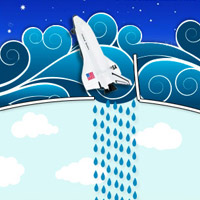 The authors of the Bible thought the sky is blue because it’s a giant body of water, identical to the sea, sitting above us. If this were true then every time NASA sends a shuttle to outer space it would have to pass through a massive “sky-sea” before reaching outer space.

And God said, “Let there be an expanse between the waters to separate water from water.” So God made the expanse and separated the water under the expanse from the water above it. And it was so. God called the expanse “sky.” And there was evening, and there was morning-the second day.
Genesis 1:6-10

2Supposedly rain is also caused by the opening of windows in the sky. 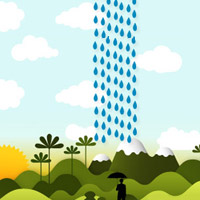 The authors of the Bible also thought that rain is caused by the opening of windows in the sky, which lets water from the sky-sea pour through. Today we know that rain is actually the result of a four stage process, called the Water Cycle, involving evaporation, condensation, precipitation, and collection.

3The Bible says the moon is a source of light, just like the sun.

The Bible claims that the moon is a source of light just like the sun, only dimmer. In reality, the moon only reflects light from the sun yet the Bible specifically says the moon is a “lesser light” and that the light belongs to the moon.

4The Bible thinks Earth is a stationary fastened object, on actual pillars. 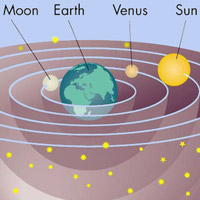 We obviously know that Earth is constantly in orbit around the Sun, but the authors of the Bible still thought it was stationary and the center of our solar system. Throughout the Bible, it claims that Earth is stationary, that it does not move, and cannot be moved.

The authors go on to tell us that Earth was built upon a literal foundation, and that the foundation is fastened to actual pillars. Job even tells us that these physical pillars tremble when the earth shakes. And the book of Joshua not only says that moon and the sun orbit around Earth, but that they even stopped their orbit for a day.

Who laid the foundations of the earth, that it should not be removed for ever.
Psalm 104:5

Which shaketh the earth out of her place, and the pillars thereof tremble.
Job 9:6

Say among the heathen that the LORD reigneth: the world also shall be established that it shall not be moved….
Psalm 96:10

Whereupon are the foundations thereof fastened? or who laid the corner stone thereof;
Job 38:6

…for the pillars of the earth are the LORD’s, and he hath set the world upon them.
1 Samuel 2:8

The LORD reigneth, he is clothed with majesty; the LORD is clothed with strength, wherewith he hath girded himself: the world also is stablished, that it cannot be moved.
Psalms 93:1

Fear before him, all the earth: the world also shall be stable, that it be not moved.
1 Chronicles 16:30

And the sun stood still, and the moon stayed, until the people had avenged themselves upon their enemies. Is not this written in the book of Jasher? So the sun stood still in the midst of heaven, and hasted not to go down about a whole day.
Joshua 10:13

Some claim that Joshua meant that it was Earth which stood still, making the sun appear to be the one that stood still. If Earth did halt its 1,000 MPH rotation everyone would have been killed and flown off of the face of the planet.

5It also describes Earth as being flat. 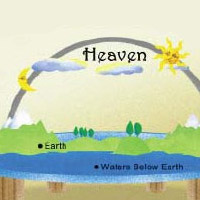 The Bible constantly describes Earth as being a flat circle that has a top, a bottom, and literal ends which can even be grabbed on to. The book of Daniel even speaks of a tree placed at the center of the Earth that is so tall it could be seen all over the world. Obviously on a spherical Earth, no matter how tall or high up something is, it can’t be seen by people on the other half of the planet.

Matthew and Revelation also make claims of objects so high up that they can be seen by everyone in the world. These stories describe scenarios that are only plausible with, and perfectly describe, a fictional flat Earth setting for a reason. Because the authors of the Bible, like many people of the time, actually thought the world was indeed flat.

It is He who sits above the circle of the earth, And it’s inhabitants are like grasshoppers, Who stretches out the heavens like a curtain, And spreads them out like a tent to dwell in.
Isaiah 40:22
That it might take hold of the ends of the earth, that the wicked might be shaken out of it?
Job 38:13
Thus were the visions of mine head in my bed; I saw, and behold a tree in the midst of the earth, and the height thereof was great. The tree grew, and was strong, and the height thereof reached unto heaven, and the sight thereof to the end of all the earth
Daniel 4:10-11

Again, the devil taketh him up into an exceeding high mountain, and sheweth him all the kingdoms of the world, and the glory of them;
Matthew 4:8

Behold, he cometh with clouds; and every eye shall see him, and they also which pierced him: and all kindreds of the earth shall wail because of him. Even so, Amen.
Revelation 1:7

When he prepared the heavens, I was there, When he drew a circle on the face of the deep.
Proverbs 8:27

Namely, of the gods of the people which are round about you, nigh unto thee, or far off from thee, from the one end of the earth even unto the other end of the earth
Deuteronomy 13:7

The LORD shall bring a nation against thee from far, from the end of the earth, as swift as the eagle flieth; a nation whose tongue thou shalt not understand
Deuteronomy 28:49

And the LORD shall scatter thee among all people, from the one end of the earth even unto the other; and there thou shalt serve other gods, which neither thou nor thy fathers have known, even wood and stone.
Deuteronomy 28:64

The measure thereof is longer than the earth, and broader than the sea.
Job 11:9

6The Bible has a very poor understanding of basic animal facts.

Talking donkeys and snakes aside, the authors of the Bible sure could brush up on their basic knowledge of animals. In Leviticus bats, which are actually mammals, are included in a list of fowls. It also includes locust, grasshoppers, and the beetles in a list of flying animals with four feet even though they are six-legged insects. And according to a story in Genesis, Jacob’s flock gave birth to striped offspring because they were looking at a striped pattern while having sex.

Yet these may ye eat of every flying creeping thing that goeth upon all four, which have legs above their feet, to leap withal upon the earth; even these of them ye may eat; the locust after his kind, and the bald locust after his kind, and the beetle after his kind, and the grasshopper after his kind. But all other flying creeping things, which have four feet, shall be an abomination unto you.
Leviticus 11:21-23
And Jacob took him rods of green poplar, and of the hazel and chesnut tree; and pilled white strakes in them, and made the white appear which was in the rods. And he set the rods which he had pilled before the flocks in the gutters in the watering troughs when the flocks came to drink, that they should conceive when they came to drink. And the flocks conceived before the rods, and brought forth cattle ringstraked, speckled, and spotted.
Genesis 37-39