Everything You Need to Know AboutThe Theory of Evolution

Biological evolution is any genetic change in a population that is inherited over several generations. These changes may be small or large, noticeable or not so noticeable.

2Evolution is not just a theory. It is a scientific theory, a proven fact.

In laymen terms a “theory” is just a guess. But in scientific terms a guess is called a “hypothesis”. A scientific “theory” on the other hand is a proven explanation based on empirical evidence of how and why something occurred or works.

Did you know 99.85% of all U.S. scientists of the relevant fields of earth and life sciences agree that biological evolution is a fact?

Percentage based on a poll of 480,000 U.S. earth and life scientists reported by Newsweek.

It does not require any faith to acknowledge evolution as truth. The theory of evolution is a scientific explanation based on empirical evidence. Nothing in science requires faith or is a matter of belief, if it did then it would not be science.

4New species occur when too many changes in the DNA occur.

Species are not classified based on physical appearance, they are classified on the genetic level. A species is a group of animals that can regularly produce fertile young while interbreeding. Whether or not two animals can interbreed is determined by genetics. The greater the number of differences in the genes the less compatible two animals are.

Poodles and cocker spaniels are different breeds of the same species, Canis lupus. They are genetically similar and can reproduce fertile young. Horses and donkeys are separate species because they are less similar genetically causing their offsprings, mules, to usually be infertile. All male mules and most female mules are infertile.

5The only difference between Micro and Macro evolution is time.

Macro and Micro evolution have little to nothing to do with appearances. Changes are accumulated to the DNA every time it is passed on during reproduction. If the accumulated changes on a genetic level cause organisms to be unable to reproduce with each other they are defined as separate species. These changes are a case of Macro evolution. If the changes do not make the DNA too different to prevent the organisms from reproducing with each other it is a case of Micro evolution.

6The theory of evolution is how life evolved, not how it was created.

Some ask, “If humans evolved from apes why are there still apes?” As the theory of evolution explains, humans did not evolve from modern apes. We simply share a common ancestor. Modern apes are our distant cousins, not our ancestors.

8All of life is made of non-living matter.

9Life, by its simplest definition, is a looping chemical reaction.

10DNA is the blueprints of life that guides evolution.

All embryos start off as a nearly identical cluster of cells, and it is the DNA which dictates how an organism is constructed during its development. DNA acts sort of like blueprints for the cells, the slightest changes in the DNA results in a change of the final structure. Each bar on the twisted ladder of DNA is called a “base pair” and consists of 2 of the 4 bases; Adenine, Thymine, Guanine, & Cytosine. A pattern of base pairs is called a gene and the complete collection of these patterns is called the genome.

11DNA is altered everytime it is passed on, life is always evolving with every offspring.

When a living organism (including us humans) reproduces it makes a copy of its DNA to pass on to its offspring, so that offspring’s cells has a set of blueprints to base its development on. Our DNA blueprints are a copy of our parents’ DNA blueprints, but not a perfect copy. Every single time DNA is copied during reproduction errors occur in the copying process, leaving slight changes known as “mutations.” Such mutations commonly range in size from a single base pair to a large segment of a chromosome. Most of these changes, but not all, are so slight that they have no effect on appearance or bodily functions and go completely unnoticed. As generations pass these changes add up causing the current DNA to differ more and more each generation from the ancestral set of DNA.

12Evolution is not random, it is guided through Natural Selection. 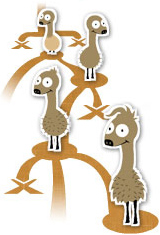 While the mutations in DNA are random, the designing process and selecting of what mutations get passed on to the next generation is NOT random. Only the DNA mutations of those who survive and reproduce gets passed on and built upon.

Take giraffes for example, they originally all had short necks. Since giraffes use their necks in foreplay, when a DNA mutation led to having a slightly longer neck, those with this trait were more likely to reproduce. Over generations this led to some giraffes having longer and longer necks.

An added luxury of having longer necks was the ability to also eat leaves that were higher up. As their environment changed, plants and bushes became scarce. This lead to the extinction of short neck giraffes, since they could not reach the remaining vegetation which sat up in the trees.

13The Theory of Evolution even explains the complexity of the human brain and eyes.

It’s easy to imagine how simple structures could have evolved, but many have trouble grasping how complex structures like the human eye could have evolved in stages. Some ask, “what good is half an eye?” The answer to that is actually simple, half an eye is half as good, which is a great improvement over nothing. When it comes to the evolution of the human eye or evolution of the human brain we can actually look at the various stages in organisms that are around today. Evolution has led to the diversity of life with organisms of various complexity.

14Understanding evolution is important to improving the quality of human life.

The Theory of Evolution explains the biodiversity of all life on Earth, and our relationship with nature and other living organisms. It is has formed the basis of productive and active research for over 140 years, and understanding evolution is the key to creating vaccines and curing life-threatening diseases. To stay one step ahead of pathogenic diseases, researchers must understand the evolutionary patterns of disease-causing organisms. To control hereditary diseases in people, researchers study the evolutionary histories of the disease-causing genes. In these ways, a knowledge of evolution can improve the quality of human life.

15The evidence from separate fields of science all independently display the same evolutionary tree, as the Theory of Evolution predicted.

What makes all the evidence for evolution so powerful is that it all matches up! Transitional fossils are found in rocks of just the right age and location, matching up with both the evolutionary timeline and the ancestral migration path of species. Fossils are not randomly scattered. The fossil record also shows us evidence in their structure of an evolutionary “family tree” branching out from a common ancestor. The discoveries in genetics and DNA also show us an evolutionary family tree, one that matches up exactly with the fossil record. The evidence found in embryos and vestigial organs also illustrate this same family tree. Dating/age, migration paths, the fossil record, embryos, vestigial organs, genetics, and DNA all independently tell the exact same story, exactly as the Theory of Evolution predicted.

Sure, the complexity of life may look like supernaturally created magic to some. Once you understand the basics, however, and put aside common misconceptions you start to realize how simplistic the fundamental mechanics of life really is.